Antoine LeBlanc (My only "White" ancestor) 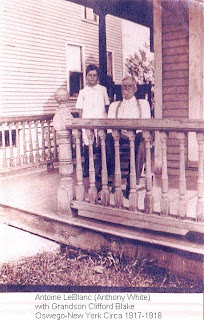 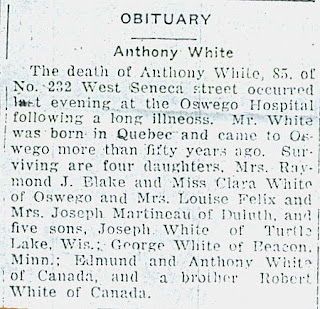 Antoine LeBlanc
My 2nd g-Grandfather, was born July 8 1835 in Saint-Anicet Quebec to Jean LeBlanc and Marguerite Lemay. Antoine married Adeline Caza in Saint-Anicet on Jan 8 1856. From this marriage would come 8 boys and 4 daughters. In 1877, the family immigrated to the United States settling in Oswego New York. In Oswego, Antoine changed the family name to "White", an anglicized version of LeBlanc, and became a farmer.
Antoine's first wife died in 1881, and he married for a second time, an Adelia Poulin in Oswego. Two daughters and a son would come of this second marriage.
Antoine was to remain in Oswego under the "White" surname until his death on February 18, 1919
The three children born of the second marriage remained in the Oswego area and keep the surname "White". The children of the first marriage moved away from Oswego and all went back to the French surname of "LeBlanc"
Posted by Monte LeBlanc at 4:54 PM